Standing here on a New Jersey beach, a placid Atlantic Ocean before me, the news is not good. Two of the most relentless forces of nature are robbing me of sleep, reason, and the bonhommery that is my trademark as a moto writer. Those forces are glacial melt and ball drop. The leading experts on glacial melt say the oceans are rising at the rate of 3.2 millimeters per year (approximately .13 inches annually). My testicles are dropping at the rate of .13 inches daily. Calculations conclusively prove that a rising Atlantic and dropping testicles will make contact at 2pm, next Thursday. 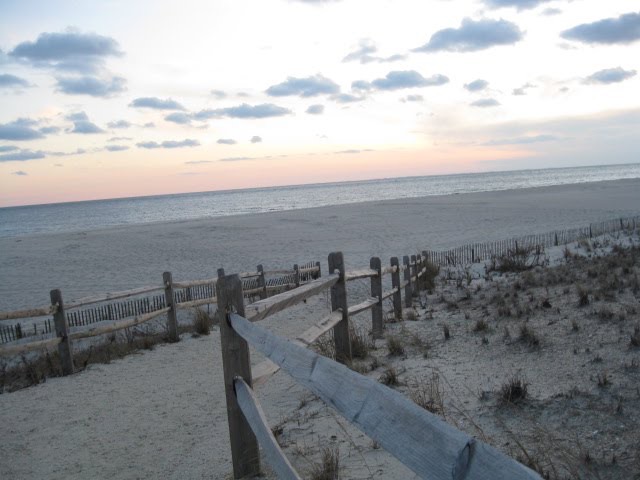 Above: In one year, the rising Atlantic Ocean will claim another .13" of this doomed New Jersey Beach. Photo by the author.

A biker’s testicles are the second most important thing in his life. The first is the other thing, which makes all of the significant decisions, and the third is his motorcycle. Scientists have concluded there is a significant link between testicle size and motorcycle horsepower. While neither is critical for the perfect romance nor a great ride, nobody really believes it. A comprehensive study conducted by the Wilmington Institute (Wilmington, NY) indicates that BMW “K” bike riders have the hugest testicles on average, and this includes the women too. (A number of BMW “K” bike riders carry their testicles in a single-wheeled trailer behind their bikes.)

Huge testicles can give a motorcycle rider two competitive edges. The first is on the track. Racers are required to throw their weight from one side of the bike to the other when taking high speed curves. Many times you can see them leaning on a puck-like device attached to their knees. This is known as a “testicle receptacle” and serves as a pocket for the same. It allows the rider to get an extra three or four pounds into the lean, while taking the strain off the extended knee.

The second is at the bar, after the bikes are parked for the night. Many riders will thrill the ladies in the crowd by hammering a spike into a railroad tie — in four shots or less — with simple squat thrusts. (I didn’t believe this at first until I heard a beautiful woman say, “That BMW rider must have some balls to come into a joint like this. I bet he could hammer spikes with them.”)

While huge testicles serve a primal purpose, they are often targeted by divorce lawyers as trophies for ex-wives, who are seldom satisfied to get the lungs. The worst of huge testicle reversal occurs when a man in in his early sixties, and his nuts begin to hang like the bad guy in a 1950’s western. They don’t decrease in size or bulk, but start to swing like twin wrecking balls (which of course was really cool when you were 19, and the arc of swing was a lot less than three feet).

I ignored the early signs of tragic testicle trajectory. Then one summer night, I had 52 drinks while plotting my editorial career’s high-points and went into the garage to confer with a noble BMW K75. I fired up the bike until it spoke in fluent conspiracy. Some say a K75 whines like a mother-in-law caught in a leg-hold trap. (It doesn’t. I compared the two in an experiment and discovered you can listen to one all night.) I was wearing a pair of Kevlar-lined, loose-fitting biker comfort shorts, designed to go under armored mesh riding pants, which ended six inches above my knees. I climbed on the bike with gusto, and without realizing it, slung my lowered pinecones onto the hot cylinder heads (or what passes for the same on a flying brick).

My right cojone now bears the legend “BMW” as a sort of brand, which it is. Thank heavens there is no roundel on the cylinder heads or I’d get caught up in that whole licensed logo thing. Leaping from the bike, I made it to the kitchen and thrust my pineapples into an open carton of fudge swirl ice cream. It was at that moment the love of my life de jour walked in. She said, “Whatever the hell you think is going to happen next simply isn’t.”

It is possible for an aging rider to work around Thor’s hand grenade drop, but it takes a little planning. I noticed that there is a chest pocket in my old Joe Rocket Meteor jacket that doesn’t accommodate my smart phone. I can put my testicles in it, though, which will make dragging them behind the bike a thing of the past. I do not recommend flying into the garage on a hot day, and tossing your jacket into a distant corner, however. Testicle drop works like an old window shade... Things only go in one direction.

I recently decided to make a play for a woman I know and went to plastic surgeon to investigate a testicle tuck. This  complex procedure rehangs 7 feet of existing material  to give a man in his sixties the testicles of a man in his late fifties. I was willing to give it a shot until the surgeon explained that the testicular rehang incorporated three mounting points. Two of these are on each side of the recipient’s groin. The third is on the underside of his chin. So while I’d have 38 inches of ground clearance (and guaranteed tidal resistance) I’d have a wrinkled turkey neck. Shaving would also become a 2-hour daily challenge.

There comes a time when a man must face facts. There is no easy way to beat the tides or gravity. A suggestion by a dedicated reader to inflate my love balloons with helium left me dangling 6 feet above the ground. Likewise, riding boots with 36-inch heels have limitations too. So I am doing the next best thing. I am declaring Saturday, October 24th as International Ball Drop Day. I will be at a local gin mill over in Seaside Park, NJ — Bum Rogers — for a bowl of lobster bisque and a platter of crab balls. I figure 12:30pm is good for an off season weekend.

Author’s note: Have you ever noticed that once you fall in love with a piece of gear (i.e. boots, gloves, helmets, etc.), they are forever changed by the manufacturer into something so truly fucked up that you would never buy it again? This has happened to me with fishing gear, computers, and trucks. I own a great riding jacket that was so thoughtfully designed I bought it in three (descending) sizes. Then I made the mistake of publishing how much I liked the coat. The manufacturer promptly fired all the people who worked on this riding gear and blew up the factory. Their new model was designed by the same twelve blind men who once consulted on the nature of the elephant.