The First Serious Ride Of The New Season

Last Saturday was the first serious ride of the new season for me and the results came back mixed. It is no secret that I having more difficulty with this arthritis now than I was having only a few months ago. Getting my leg over the seat almost always requires three or four attempts but a bigger problem is getting my left leg up to the peg. This simple motion sends a jolt of searing pain through my hip and up my spine. It is the kind of pain my soul remembers and I have to consciously order my foot to the peg, as it will not go willingly.

I initially planned to ride down to Summit Point, West Virginia last weekend to watch Tom Cutter tear up the race track, but circumstances led me to believe it might be smarter to try something less ambitious. I opted for a lunch ride to Gettysburg. The difference was 350 miles versus 205 miles. And for a little variation, I thought I’d try the Old Lincoln Highway as the primary route. 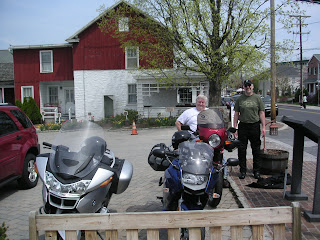 I parked on the curb at the "Dobbin House" to use as a step in dismounting.
Jay "Hokiebells" (the guy from Allentown) waits for me to fall over.
Photo by "Disco Dick" Bregstein
(Now Click To Enlarge)
Saturday started out sunny and cool, 53º, and while mesh was the gear of choice, the rain liner was in place against the morning chill. This lasted all of 7 miles, where I met Dick Bregstein and Jay “Hokiebells” (the guy from Allentown) at the Exton Diner. We were an all Beemer team, with Dick on his F800, Jay on his “R” bike, and me on the venerable K75. The liner in Dick’s jacket looks like it is made of aluminum foil, and he was rather proud of this as he struck “Bee Gees” type poses in the diner parking lot. Dick will no longer be known as “Bermuda Triangle” Bregstein. His new name is “Disco Dick.” 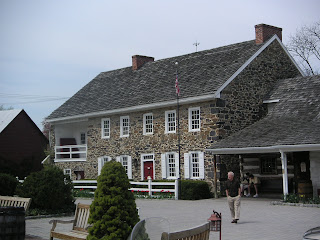 The "Dobbin House," Museum, Bar, & Restaurant
Blue and Gray Both Welcome
Photo by Dick Bregstein
(Now Click To Enlarge)
We picked up the Rt. 30 bypass and had a leisurely run to Gap (leisurely as the police were already dancing on the shoulders), and cut over to Strasburg and Willow Street (missing that awful stretch of road through Paradise and the outlet centers of Lancaster). I turned north on Rt. 272 with the intent of picking up Rt. 30 again, without realizing we’d run straight through old downtown Lancaster. Traffic was heavy and I’d led us around one hell only to go directly through another.
The ride to Gettysburg on the old Lincoln Highway was hot, slow, and occasionally annoying. People having garage sales caused cars to pull on and off shoulders suddenly. I wonder how many people would stop if there were big signs up that read, “Please Buy Our Old Used Shit.”

The tourist season was in full swing at Gettysburg as some sort of enactment was taking place. Town was full of Union soldiers marching with rifles and courtly southern officers saluting and bowing to each other. This is how the south managed to lose the war. We had guns and they had manners. At first, I thought I was looking at a bunch of huge penguins coming along the main drag. They were a family riding segways in a single file. All were wearing helmets and one was towing a trailer with a kid in it. 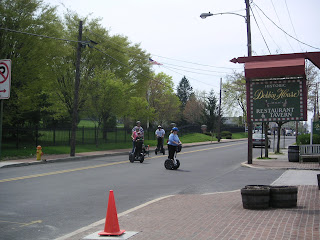 I was hotter than hell by the time we pulled in the parking lot of the Dobbin House, the best place to eat in town. I parked next to the curb so I could use it as a step. But before I could entirely dismount, Dick came tearing out of the restaurant with the news that there was a 45-minute wait for a table. The immediate vote was to continue riding.

The next stop was three miles away, at the Sheetz station, where we gassed up and had a cold drink. A fresh crop of motorcycles rolled into this place every three minutes. We all noticed one thing: the squids have the hottest pattooties on the backs of their bikes. It was here that Dick mentioned I had to pour a few drinks into my topcase to get it to ride with me.   The return route was Rt. 15 and the Turnpike. By this time, my medication was wearing off and another pill didn’t help much.
The topic again rolled around to hot-looking women, when we pulled over at the first rest area on the Turnpike. I casually dropped the statement that I always had luck getting skirts to chat with me in places like this. Jay laughed in my face and Dick spit.
A nice-looking woman in her early 40's pulled up in a minivan, and got out holding two Yorkie pups. I couldn't resist.
"What a beautiful pair of puppies you have," I said, bowing like a Confederate Colonel.
She shot me a dazzling smile and walked over.
"He's despicable," hissed Bregstein. "Er Miss... May I pet your puppies?"
"Fuck you, Andy Gibb," she replied, handing me a dog.

Counting the Sheetz station, the toll booth, a stop light, and both rest areas on the turnpike, I pulled over and put my feet down 5 times in 102.5 miles. This isn’t the best I’ve ever done. But it’s not the worst either. It used be like this when I first rode up to Strasburg three years ago. But the limited mobility in my left hip is new. It cannot be ruled out that this might be something of a curtain call. I have a little overnight trip planned to Elks Neck State Park this weekend, which is only about 90 miles distant. This may give me an opportunity to gradually push the envelope again.

You know back in the 70's there was an astronaut who crashed in his space craft. Secretly they replaced both his legs, an are and one of his eyes with robotic replacements. I mean that was the 70's imagine what they could do now. Jack, you need to enter the space program, crash your craft and get your legs replaced. Simple.

Dear Jack:
You can make fun of my silver shirt if it makes you feel more secure. It reminds me of when I was a kid and my grandmother knitted gloves for me that had a long woolen string that threaded through my sleeves. The kids used to make fun of that, but I never lost my gloves.

This trip was slower than our usual escapades; I think it must be the LEO breedng season, because they were out like gnats at dust. It was fun, though, and Gatorade at Sheetz was sufficient and certainly a lot faster than waiting an hour for a table.

Nice report! That pain, however, sounds evil!I hope the upcoming test trip turns out well for you. I really really hope no curtain call is in the near or distant future! I'm sure you have, but I must ask...have you turned over every stone? Tried yoga (hope that doesn't sound stupid) but I've read about yoga helping arthritis...massage, applying compresses before and after a ride, wrapping, knee/hip replacement? I might not be helping here, just trying to think of something...

I am attempting to lose weight and I try to keep limber. My daughter wants me to try yoga (she's an instructor), but it's a little out of my line. I am going to try syndvisk and see if that doesn't help. Other than that, it's drugs.

I have to tell you, for the exception of one line, this report as is as true as the North Star.

Jack,
Back when I was a "real" biker and belonged to a "real" biker club, we had a Vietnam vet with no legs who rode his Harley everywhere. He had a special sidecar attached with a little ramp so he could ride into the sidecar on his wheelchair. He had all the controls rigged to the sidecar - steering, clutch, throttle, brakes. Peopole coming the other way on the highway got the scare of their lives when they saw what looked like a driverless Harley with a helpless passenger in the sidecar. He thought that was great fun.

The weight loss thing stands a chance if there's a treadmill in your future, with you at one end and Angelina Jolie at the other. I'd bet the pain in your knees would evaporate PDQ.

Or perhaps one of these would help....

OTOH, that parts replacement thing sounds like a Good Idea!