Addendum To The Current Blog Episode

• To read this week's humorous story regarding the betrayal of a close friend through a sexual liaison with a woman, please read my blog for Tuesday, September 12, 2011.

• To discover the conclusion of the poll regarding the question "Does having a dog ride around on a motorcycle gas tank constitute animal cruelty," please continue reading below.

• To order cpoies of Politically Correct Cigar Smoking For Social Terrorists, please go to the end of this blog episode.

The Final Consensus Regarding The Dog On The Gas Tank Issue...

Only two votes supported the notion that riding around with a dog on the gas tank constituted cruelty to animals, from the perspective that any dog perched in that spot would be exposed to increased risk in an critical or emergency maneuver. One of these two voters clarified his position (in a private e-mail to me), stating that rider distraction from having a dog on the gas tank should constitute a major concern for any motorist or rider sharing the roads.

In the first few days following the introduction of the poll, conventional wisdom supported the position that having a dog on a motorcycle did not constitute animal cruelty, but that the dog’s riding position should be restricted to crate or special seat (with a restraint). Forty-six out of 100 riders voted for this position fairly early.

It was a position I myself supported. If I loved a dog, I wouldn’t place it where the animal could be easily knocked of into traffic or harm’s way.

Yet within a week, 48 voters not only supported the position that a dog could easily handle himself on the gas tank, but documented stories of riders they knew whose dogs were allegedly tank-trained. Ninety-eight percent of poll participants clearly stated that in no way did allowing a dog to ride on a motorcycle constitute cruelty to animals. Statistically speaking, the position of whether to allow a dog to ride o the tank or in a crate on the pillion was a dead heat. Once again, some of the most experienced riders I know (many with well over 100,000 miles under their saddle) are divided on a key point — like helmets and oil.

I got the final comment from Twisted Roads reader John Langsford II, who wrote:

Jack — You have probably received 50,000 dog pictures since posting your latest blog, but email is cheap so here's a few more. One is the dog mentioned in the blog, the picture of the rear crate was taken a Morten"s BMW Fall Open House 2008. A fellow BMW rider that goes to New Hope and Van Zant rides with a small white dog in a baby chest carrier. At Ephrata I saw a fellow with a small dog in his tank bag (homemade) complete with heating pad for winter riding. At the Vermont RA Rally met a couple with a dog in a tank bag they ordered from England with windows and a Sun Roof for the dog to stick his head out to catch the breeze. Todd and Laura's dog always looks great in the sidecar 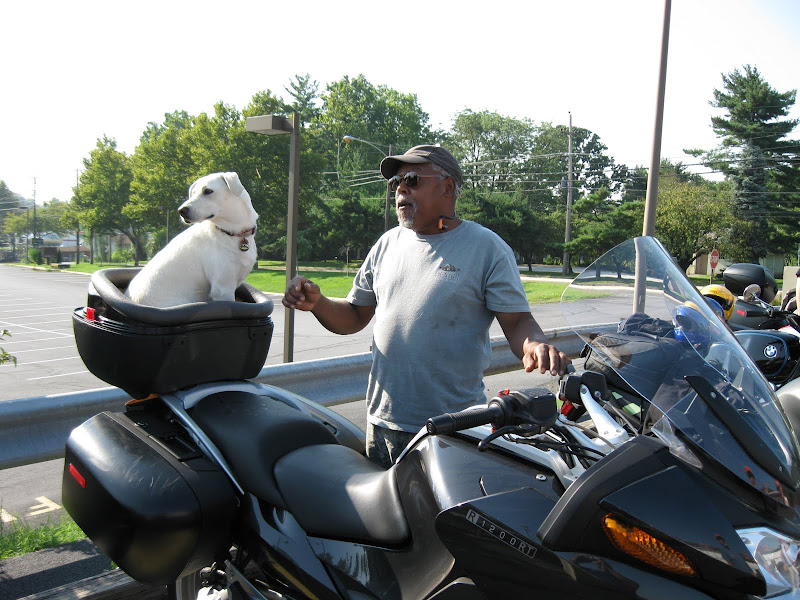 Above: Dave Thomas and his dog, who rides around in a pillion mounted open-case. Photo submitted by John Langsford II. 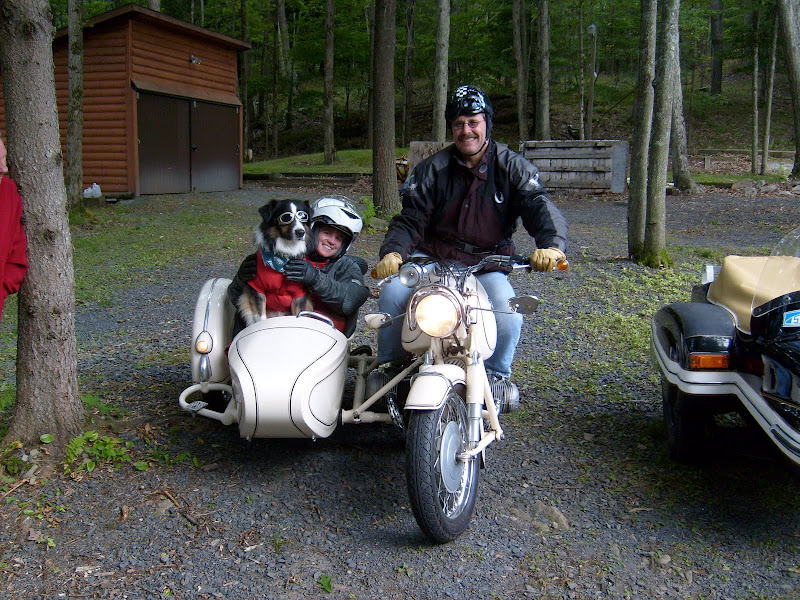 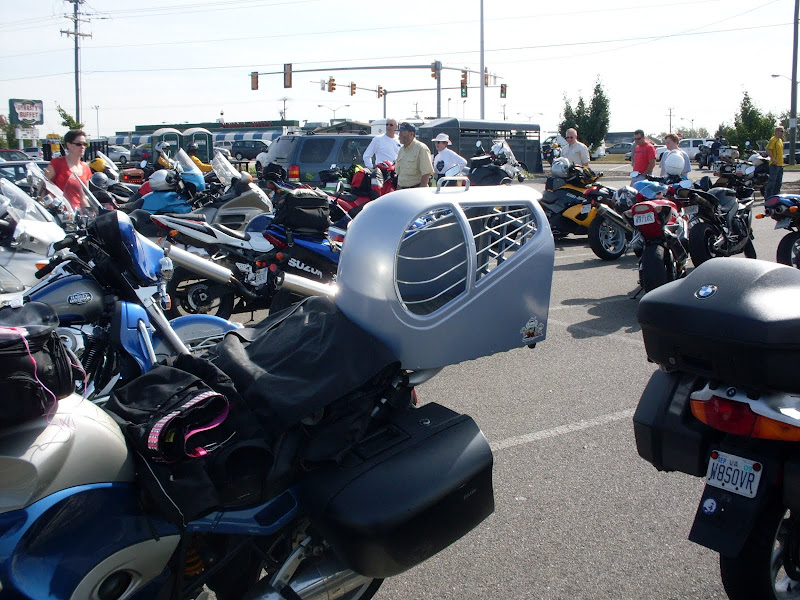 Above: Special luggage rack-mounted pet crate seen at Morten’s BMW in 2008. Photo submitted by John Langsford II.
Regarding Reports of 4-Hour Erections And Other Marvels Atributed To Reading Politically Correct Cigar Smoking For Social Terrorists...
On March 4, 2001, Chester Heaver, age 65, ordered a copy of Politically Correct Cigar Smoking For Social Terrorists, and read three chapters before retiring for the evening in the company of Evangeline Heaver, his wife of 35 years. Though he and Evangeline were close, they hadn’t been sexually active since Chester fell off the high row in the stands during the tractor pull at the Harumph County Fair, ten years earlier. Chester’s power piston had simply given up the ghost. Yet after reading these chapters, “A First Time for Everything, The smoking Dog of Schiller’s Corners,” and “The 200th Cigar,” Chester’s weed whacker rose to the occasion and went right after the bush. It was still plowing the “lower 40” four hours later, when Evangeline shot him at point blank range. In fact, it was still thumping the casket cover in the funeral home three days later.
In the sleepy hamlet of Fenny’s Notch, West Virginia, Mucca Fignotti, an immigrant stone cutter from Croatia, learned that his romantic suit with Emma “Teasy” Smigget was going south. He had captivated her with his “Gypsy eyes,” but failed to nail her enduring attention with an average performance in the sack. Dejected and in the throes of despair, he found a discarded copy of Politically Correct Cigar Smoking For Social Terrorists along the tracks where he had planned to get run over by a train. (The book had been autographed to Chester Heaver.) Fignotti read three well-earmarked chapters and discovered his manhood preceded him by a good foot (measured in dog years). He arrived at Teasy’s trailer with a spackle bucket of rocks dangling from the far end of Thor’s Hammer. She was finally impressed.
And in the crossroads of Knowleton, NJ, Chrissy Wilcox-Flumen, the much abused wife of a local cheesewright, found solace from a household full of marital demons in a second-hand book store. There she found a copy of Politically Correct Cigar Smoking For Social Terrorists, with a smudged-autograph to a farmer out in Harumph County, and handwritten notes (in a Croatian dialect) across the bottoms of several pages. She bought this used book, for $187.00, read three chapters, and grew a set of balls! Chrissy went home, made a special chicken pot pie, and shoved it right up her husband’s ass — hot out of the oven. Then she bought a fire-engine red motorcycle and set out across the country, reading this book aloud to other women in similar circumstances.
These results are not typical.
In fact, they are purely anecdotal and cannot be proven. Author Jack Riepe even denys them and refuses to discuss his own romantic successes, which are significant, likely attributed to the book. But he has taken possession of the original book autographed to Chester Heaver, and is selling if for $50. In the meantime, he is offering new (not used copies) of Politically Correct Cigar Smoking For Social Terrorists (with bindings as tight as young clams) for the final...
End Of The Summer Price of $25
plus $5 Shipping & Handling 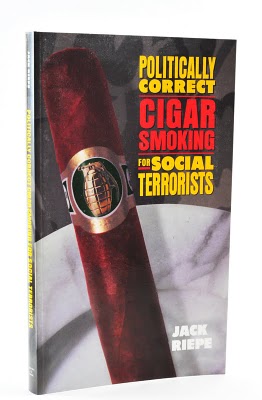 This is the last time this book will be offered, individually autographed and personally inscribed by the author, for this price. The Christmas Sale price of this book will be $35 in November, as the final paperbound copies of this book are distributed.
In Politically Correct Cigar Smoking For Social Terrorists, Riepe puts cigar-smoking in perspective, and relates it to love (getting laid), making romance last (how to pretend to listen), and the manly arts (hunting, fishing, spitting, and public speaking). Critically acclaimed, this book improves the quality of at least one life with every sale.*
Politically Correct Cigar Smoking For Social Terrorists is more than just the funniest damn book ever written about cigars. It's a unique perspective on romance, politics, economics, science and America's hottest new trend -- cigar smoking. Winner of the Wilmington Institute of Holistic Dry Cleaning's prestigious “Golden Hand Grenade Award” (for advice on relationship building in third and fourth marriages), this book offers a rare insight into subhuman nature. Author and humorist Jack Riepe spared neither himself, nor anyone else, in a desperate bid to tell his side of 30 outrageous stories.
*Riepe's life
To Order Your Copy of
Politically Correct Cigar Smoking For Social Terrorists:
Email your full name, address, and phone number to:
jack.riepe@gmail.com
Indicate the book is for yourself.
Put: "Book Order" in the subject line. Each book is shipped with an invoice and a stamped, pre-addressed payment envelope. Write a check, and slip it in the mailbox.
To Order A Gift Book For A Friend:
Email your full name, address, and phone number to:
jack.riepe@gmail.com
Put "Book Order" In the Subject Line
Very Important:
Also include the gift book’s recipient’s full name, (First and Last), and tell me something about him. (i.e. he plays golf, he rides a motorcycle, he hunts, he smokes cheap cigars, tell me something.) Your name will be included in the inscription on the book.
©Copyright Jack Riepe 2011
Posted by Jack Riepe at Wednesday, September 14, 2011

I like the BMW with the side car shot. My wife has started to mention how much her dogs would enjoy riding in a sidecar. Maybe that would be a good winter project.

The surveys are an interesting addition to your site. I hope you are getting some riding in before the wet leaves, sand and gravel seasons hit...

My arthritis was outrageous this year, made much worse by the heat. I am riding this weekend though, as temperatures high in the '60s cannot be beat. Amazingly enough, I'll be breaking out the fall ballistic jacket fir the ride to breakfast tomorrow.