“Toto” Introduces Butt-Powered Trike With Strong Implications For US Market

Japan is a nation known for industrial innovation and bold design leadership, often creating the product first and then developing the market afterwards. Toto — the leading Japanese manufacturer of commodes — recently entered the moto industry with the development and release of a trike powered by biogas, that is collected from the rider via an onboard toilet. Billed as “Toilet Bike Neo,” the machine will soon depart on a month-long tour of Japan, to highlight the green initiatives of the Toto corporation.

The implications for the US moto market are staggering.

For example, competitive long-distance riders (like those who run against the clock and each other in Iron Butt events) would find a certain advantage in never having to stop for fuel, other than grabbing a quick burger and fries at the drive-in windows of popular fast-food restaurants. While details of the machine are sketchy at the moment, it does seem that the rider would have his, or her, ass hanging in the breeze (quite literally) at least once each day.

Then there is the question of “regular” versus “high test.”

Will riders who routinely fill up on Indian cuisine or Mexican food become more prolific sources of combustible gas, or gas of a more explosive nature, converting the simple machinery of this trike into a rocket-powered dyno sled? While biogas motors are not new, the collection and conversion processes of this trike appear to transcend innovative. And if morphed into a typical US conversion, with sound being a critical factor in the machine’s selling point, can we expect to hear, “Loud farts save lives” from the leather and chrome segment?

“Farkle” (expensive motorcycle accessories) is not only a big part of a rider’s self-expression, but represents billions of dollars in annual expenditures in the moto industry, which has stalled in the sales of super-bikes owing to a global economy that has found a toilet of its own. Yet Toto’s machine for the discerningly effluent comes equipped with LEDs that write messages in Japanese, as well as a sound system that plays music. (Toto currently manufactures deluxe commodes that provide stock quotes, tell stories, or otherwise chat with system users, during anal transactions. They are easily converted to transmit campaign debates as well, which some users find inspiring.) 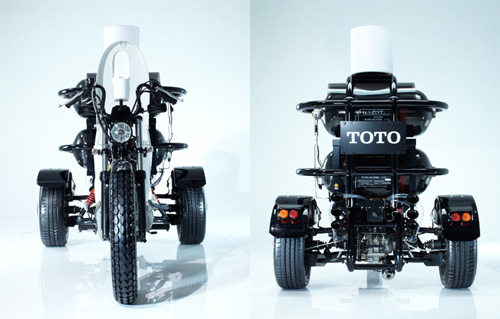 Above) Toto's Neo Bike uses an on-board commode to generate biogas for the engine. Social engineers claim this adds a new dimension to "hanging your ass in the breeze." Photo from internet press release.

Yet the real impact for US motorists concerns other vehicles that might incorporate similar biogas applications. There is talk that municipal buses might have seats replaced by toilets, enabling commuters to save 15 or 20 minutes each day by incorporating a morning ritual into a process that is not only easy on the environment, but which could also lower weekly transportation costs. There might also be a advantage to seeing the asses of hot-looking commuters (both male and female), removing the suspense that can build up over the course of a ride to work. (This, of course, is a double-edged sword as the US populace has a growing reputation for huge, ugly, fat asses too.)

There would be no limit to the size of the machines that could be powered by similar applications. Airliners and cruise ships could become self-propelled. Secretive bathroom rituals would then become a source of social celebration, with many travelers competing in generating both sound effects and volume of content — especially in exchange for lower fares. Established stationary institutions could also become “fueling” stations. The US Capitol Building — the home of Congress — is one of the largest sources of shit in the country. Replacing the desks of Congressmen and Senators with commodes, wired to also recycle speeches and public positions, could provide endless free power for generations of Americans.

So none of us should be too quick to dismiss this trike as a typical Japanese prototype announcement.

Twisted Roads Exclusive:
• Jack Riepe's "Farewell To Pennsylvania Ride" will meet at the Frazer Diner (Westbound US-30, Frazer, Pa, about a quarter mile west of Rt. 4o1 and US-30) at 8am, for breakfast, on Saturday, October 15th, 2011.
• It's kickstands up at 9am, for an exhilerating ride through parts of Pennsylvania settled by Hessian deserters, to an authentic German Oktoberfest celebration at Hermy's BMW and Triumph, in Port Clinton, Pa.
• German Sausages and Bavarian Specialties For All Who Make The Ride!
• Door Prizes
• Ride is open to any Twisted Roads Reader • Any Marque
• While Jack Riepe is relocating, there will be no changes to his blog nor to his hardcopy monthly column.

Does it have ABS as standard?

It is rumored to have some sort of airbag equivalent, but no one really knows what they fill with.

Thank you for reading Twisted Roads,and for applying my bog's philosophy to your daily life.

Chuck and the Pheebs said...

The BTU content of blaugas (look this shit up; I'm not your nursemaid) is such that a commodetrike is nicht su gut.

The base concept is both Left Wing Democratic and Draconian; we've not found a fuel which as the same energy density as dead dinosuars in 70+years of looking - Preston Tucker and the little shit from the Bloom box be damned.

There are solutions to the pickle we're in, and I'm reminded of them riding a 25 year old bike with the HP output of an R90 and the fuel consumption of an R65 in these modern times.

Jack,
I don't think the prospect of cutting twenty minutes off my morning bus commute would be enough to entice me to ride mass transit.

I must admit I've had more than one ride go down the toilet so there could be potential here.

Thanks for bringing this innovation to my attention I'll be keeping my nose open for future developments.

Spike
Behind Bars - Motorcycles and Life

Acceptance of this "notion" will never come, after all, who'd own a full set of leathers with a "flap" at the back? : )

And what about constipated riders, will we see them on the side of the road, holding a sign: "exlax"?

I think the promotional value of a trike powered by human feces will be short-lived, even by news stories in Japan. This trike will end up beng the odd focal point of a toilet showroopm in Kyoto.

However, if the Japanese, or anyone, ever do create a bike that runs on political bullshit, we will all be rolling in the clover.

I would be hard pressed to take mass transit if every woman on the bus were naked. I do not enjoy the mad press of crowds and the hustle of running through stations — like rats in a maze — is simply beyond me.

I do think that visions of bio-fuels and electrically powered motorcycles (and other vehicles) lack cohesion. None of these plans come together nicely... And I susoect horses, camels, and donkeys are going to again be part of the transportation landscape by the time our great grand children are old enough to ride.

This is assuming there is a tight seal between the rider's aas and the saddle.

The Japanese philosophy, however, of developing the product first and the matket second has yielded some astounding results for that country. I could see fast food restaurants eventually just packaging shit for human consumption. They are halfway there now.

Here in the United Stats, elected officials from both parties have become expert in recycling total shit (bad legislation) into endlessly bad trends.

Apparently, the idea is, "If at first you don't succeed, stick with it for 40 years," or until something worse comes along.

By the time this trike is an industry sstandard, leathers will be banned and we will all be wearing Naughahyde. No one will care if their ass is sticking out.

I noticed the bike comes complete with a "rear" carrier. Presumably designed to fit a wicker basket big enough for cairn terrier sized dog. (Maybe that's the extended range option on this bike.)

Thanks for the odoriferous humor as always, Herr Riepe!

I had to Google this to see if you were full of poo and somehow mastered Photoshop. Turns out that it's not bullshit, but it could run on it, which should get you a very long way.

I find this running of tricycle most likely to succeed in dfficulty of general district roads on Northern District sub division, Kano highways.
Much thanks!
Liaolo N'Dingere,
District Manager,
Road and Trafrfic Division,
Kano
Republic of Nigeria.

Unbelievable!
Where do you get this shit, (literally)?

How you do push your luck by throwing the Netherlander connection in my face! (It is always great to hear from you, despite my connections to the (AUTBD).

While the practical aspects of this trike remain hard to with gas less than $100 a gallon... If taking a dump in the tank is the only way our grandchildren will ride in the future, than so be it.

I would never joke about motorcycles being full of shit... Politicians, yes. Some of this stuff you simply cannot make up.

Do you know Alfonse Dahdo?

The trouble with a trike like this is that native fuels may not push it to the max. Innother words, while one might use it to collect rhino shit, the end result may not produce the kind of torque to effect a good escape.

Let me know how this system would work with a tiger.

How are you, Jimbo?

I got this story from the most recent copy of "Better Accounting Practices and Gardening Tips." You should subscribe.

In any event this would no doubt have a very shitty outcome on the rear if the system should become constipated.

Perhaps the constipated mathematician riding such a device could work it out with a pencil...