Jersey City is not the kind of place improved by rain. It had been raining heavily for two and half days, spanning an irreplaceable Friday night. I was still in college, financing books, various vices, and payents on a new 1975 Kawasaki 750 Triple by loading trucks. Yet even at this early age I was fostering an invaluable work ethic that would cause me to spurn honest toil in favor of a writing career.

My faith in God -- a twitchy thing for most males at age 20 -- had been badly shaken by the fact I couldn’t pursue life like a Visagoth on the night I was legitimately off, Friday night, as it had rained in steady sheets. Granted, there were other circumstances that prevented me from getting out and around too. My Volkswagen Beetle sat in need of an oil cooler, which at the time cost a daunting $200. My girl, Roxanne, was waiting tables in a restaurant until 11pm, and an anticipated oregano sale -- a renewable source of cash -- had fallen through.

Now here it was, Saturday night. The girl was off (with a pocketful of tip money) and the roads were somewhat dry, though the night was draped with a heavy haze that held infinitely more promise for riding than a steady downpour. But I was slated to work. The injustice of this situation was driving reason from my mind. Desperate scenarios presented themselves.

Suppose there weren’t going to be any more Saturday nights? What if this was the last one? Suppose the sun turned into a super nova first thing on Sunday morning? Then I’d have spent my last night on earth loading endless trucks on a nameless freight platform. What a friggin’ waste!

“I thought you had to work.”

“Sun turning into a super nova tomorrow,” she asked.

“Pick me up around ten.”

Roxanne thought I had a direct line to NASA.

The 10pm pickup left me with an hour to kill.

The bike snorted like a war horse on the second kick, even though it was damp. Still, it took a few seconds for the three cyclinders to get the words to the song right. And sometimes, one of them just hummed. The Kawasaki was as smooth as a two-dollar quart of whiskey. I snicked the machine into gear and pulled into the street.

Less than two blocks away, I ran into Walter. The scion of Secaucus cafe society, Walter was riding a new Honda CB750. He too loaded trucks to support various vices at the very same freight company. Walter and I were creatures of habit, bad habits actually, and he’d been waiting for me for 20 minutes. “You going in tonight,” he asked around a Marlboro on his lip.

No further discussion was necessary. The fear of a pending super nova was evident in his eyes too.

Walter never struck me as the kind of guy who surfed the cutting edge, but clearly he was. He was the first in my circle to collect hot Asian girlfriends, and the first to photgraph them topless on his bike. (In fact, I never did get around to this. It is one of my New Year’s resolutions for 2008 though.) And Walter’s first bike was a Honda CB750, the motorcycle that would change the world. 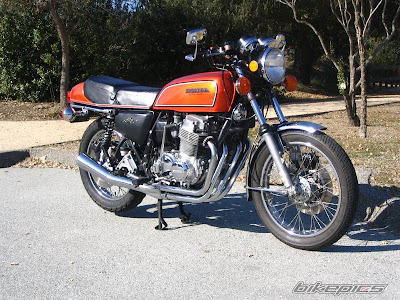 The 1975 Honda CB750 -- The bike that changed the world
The difference in the two bikes was evident at a glance, despite the fact that both were new. The Honda oozed mechanical sophistication. It’s four cyclinders sat in a forward-canted block of fit and finish that seemed to mock the Kawaski. The raised chrome letters that spelled “HONDA” on the gas tank made the “Kawasaki” decal on my bike seem dated. And Walter’s Honda had a muffled growl whereas the Kawasaki always sounded like an enraged chipper. 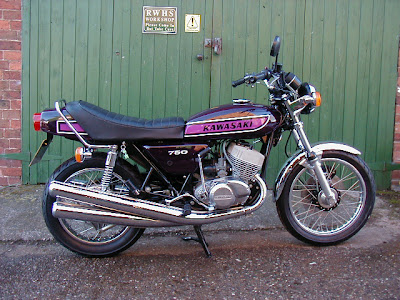 The 1975 Kawasaki 750 Triple -- The curtain call for two-stroke street technology
Despite these distinctions, the Kawsaki had a slight edge over the Honda. It was 55 pounds lighter, had 4 more horsepower, and a top speed of 126 mph versus 120. But just as the Stanley Steamer had once been the fastest car at Daytona (127 mph in 1906), the Kawasaki 750 Triple was the curtain call of two-stroke street technology, whereas the Honda CB750 was the overture of another.

A comparison of plans revealed that Walter was going to pick up Soon Yi about the same time that Foxy Roxy would be on my pillion. We arranged to meet at a certain watering hole shortly thereafter. And as both ladies lived in Bergen County (NJ), we’d be headed west for a bit.

“Want to let bikes run on Secaucus Road,” asked Walter. “Bet you two rounds I get to Krajewski’s first.”

Secaucus Road was hell’s straightaway in 1975. It had the remains of a pig farm on one end, and a slaughterhouse on the other. People dumped old matresses, furniture, and cars in the reeds that lined both sides of the pavement. It ran from Jersey City to Secaucus in a pefectly straight line for about a mile and three quarters, through the “Meadows,” a cattail-choked swamp that once meandered all the way to the Hackensack River.

“Krajewski’s” was the one bright spot in Secaucus history. “Farmer” Henry Krajewski was six-feet tall and weighed 250 pounds. His pig farm was once home to 4,000 swine, and he owned a bar called the Tammany Hall Tavern. To add to the legend, he would periodically trudge down to the New Jersey State House with a legitimate petition (1251 names), and run for the office of President of the United States. At the time, the outside of Farmer Henry’s bar was painted bright yellow and festooned with cartoon-type characters.

Krajewski’s was the first legitimate building on Secaucus Road, next to the only street light, just after the trestle for the Pennsylvania Railroad (now Amtrack). The road was pitch black all the way to the tavern.

The starting signal was the traffic light where Secaucus Road intersected with US-1&9. There was four sets of train tracks that crossed the road on the othe side of the light, through crumbling pavement. But it was a clear shot after that.

The light turned green, and the Kawasaki exploded in a banzi charge across the tracks. The raging two-stroke engine catapulted the bike forward with a scream of metal in anguish. I was flying through the dark haze when I realized that Walter was stuck back at the light. “The bastard stalled,” I thought with a laugh. It was then I started to smell a rat and a Hudson County survival reflex caused me to grab for the brakes. It had been raining for two and a half days. The darkest part of Secaucus Road was covered with three inches of swamp water.

The tsunami created by the front wheel overwhelmed the fender and covered me in a second. The water shot up under the cheap snap-on helmet shield and soaked my face. Every inch of rider and bike was as wet as if they’d been dunked in a lake. I’d released the brakes and pulled in the clutch when I’d hit the water. I had concentrated on holding the machine steady and put my feet down in ankle-deep water as the bike rolled to a stop and stalled. I didn’t drop it.

Walter pulled up 5 minutes later. “You win,” he said. “I started to feel really badly when your tail light when out.”

The two of us busted out laughing. The Kawsaki started on the tenth kick and the sun did not become a super nova the following morning.

Nice reminiscence.. I was scooting around on a cb360 back then ... bagging groceries or pumping gas vs. loading trucks. Always worried more about an entropy driven collapse of the universe more than super-nova. Same effect on employment record.

Congrats on keeping it upright!

Good story Jack. Brings back some fond memories. Enjoying your blog. Have a marvelous day, Niteowl

I fleetingly remember this story from an alcohol sodden night some years ago, in the company of both your good self and R. Ma**. But weren't you riding a Kawasaki K100?

Another good one, Jack. Back in the day a buddy had a Kawa 500cc 3. I could beat him down to my corner (about 3/8 mi) on my Norton and didn't get out of 1st gear! No puddles to mar the ride, though.

Jack,
Fun read; thanks!
Speed aside, I'd choose the Honda over the Kaw any day. My first new bike was a CB450 (2 cyl). Honda also came out with a CB450-4, but by that time I had become smitten by the BMW mystique.
Are you going to do a piece about you riding your bike into the gas pump and knocking it over?

Reminds me of a time that a high school acquaintance wanted to race me out of the school parking lot. He had a 69 Challenger and I had a 71 Coronet 440. He could have walked me, but I glance to the right and spot the front end of one of Warminster's Finest. I look back at him and say "go for it". He peels away smoke pouring from his wheel wells. I tootled away maintaining a nice 15 mph just like the law in a school zone. I passed him as he was handing the officer is license and insurance. I still laugh about that, and he is still pissed.