A Loose Interpretation of "Brotherhood"

The word “brotherhood,” as in the “brotherhood of two-wheel-riders,” carries the same weight and depth as the word “union” in the phrase “European Union.” While many of us exchange waves when passing on the road, there is very little crossing of party lines when it comes to socializing. In most biker circles, choosing a brand or a style of bike (to suit your riding tendencies, presumably) will also define the crowd you’re most likely to ride with or even gravitate toward. This is called “imprinting” when it occurs with baby ducks.

This inevitably leads to a some good-natured banter when party lines cross, and sometimes it generates the kind of pointed remarks that makes one wish he was Bruce Lee, and capable of planting a booted foot (with impunity) into the balls of the person with the big mouth.

On one of these occasions, I happened to be riding with my usual partner, Dick Bregstein, who mounts a 2007 BMW F800. This is a sport-touring bike capable of lightening fast speeds with great handling. Dick dresses the part in a full-face helmet and full ballistic gear. We joined a number of “our kind” at the Brass Rail Diner, over by Lambertville, NJ, for an early biker’s breakfast. The parking lot was filled with interesting machines. Harley’s, Beemers, and every kind of Japanese bike were represented, as were vintage Triumphs and Nortons.

We congregated among our own as two of the Harley crowd made their way down the line, inspecting the rolling stock. They paused at Dick’s and one said, “This looks like a copy of Japanese bike made for a little girl.” Dick glanced at me and rolled his eyes as if to say, “This guy misses the sexual attention he came to enjoy in a Turkish prison.”

Warm, appealing grounds of a Turkish prison.
I refused to take the bait and kept my mouth shut, considering I hadn’t been beaten up since the eighth grade, when Cynthia Balk punched the shit out of me for asking her to dance. But in my mind I was thinking, “Wouldn’t it be cool if I could yell out something Asian, jump over this bike, and kick this bastard right in the balls?” 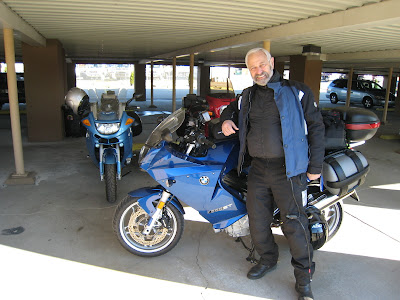 Dick Bregstein and his 2007 BMW F800 loaded for a weekend (the bike, not Dick)
On another occasion, Dick and I pulled over on a scalding hot day in southern Virginia. We’d done about 340 miles and planned to do another 60 before throwing in the towel. Dick was wearing full body ballistics as was I (from the waist up and jeans below). We were like heat sinks in the 94º temperature. Yet between us and the ice cream stand were three representatives of the chrome and leather vest lifestyle. One asked, “Why do you jerks dress like that on such a hot day?”

I assessed the situation. My bike was idling and pointed toward the road. One twist of the throttle and I’d be scott free. My answer was, “Because your girlfriend humps me extra hard when I dress like Darth Vader.” But the words died in my mouth when I realized Dick had already dismounted and removed his helmet. I imagined how perplexed the coroner would be to find the F800 shoved so far up Dick’s ass. So I said nothing. As it turned out, this was friendly banter. We had a nice conversation with these guys. I’m sorry I didn’t get their phone numbers because I wanted to show them how I looked in that gear an hour later when some stupid bitch ran me over at a stop light.

On the other hand, I’ve met lots of friendly Harley riders at the HD dealership in Lancaster and at a couple of local charity rides. When I first participated in the Pediatric Brain Tumor Ride For Kids three years ago, the Beemer riders I met wouldn’t talk to me. One even suggested that BMW officials would seize my bike if I didn’t lose weight. I was shocked to hear this from a guy wearing a roundel on his jacket. A Harley rider next to me leaned over and said, “Wouldn’t you just love to kick him in the balls?”

I told the guy I’d give him five bucks if he’d hold the douche down while I went for a field goal.

The truth of the matter is that there is a lot of pointed remarks exchanged within our club too. I am the constant target of comments aimed at my limited riding skills. But I try to give as good as I get. After one group breakfast, a bald, humorless midget held everyone enthralled by revving his Ducati. I’m sure you are all aware of the distinctive sound this machine makes at idle. I suggested it might sound differently if he put a quart of oil in it.

Two seconds later, he butted me in the balls -- with his forehead. Apparently, there are limits.


Jack Riepe
© Copyright Jack Riepe 2008 -- All rights reserved
AKA The LIndbergh Baby (Mac-Pac)
AKA Vindak8r (Delphi)
AKA The Chamberlain -- PS (With A Shrug)
Posted by Jack Riepe at Tuesday, February 19, 2008

Dear Jack:
Thank you for using my stage name. I wouldn't want anyone important to know that I ride with you.
What I never told you was that after I left you lying in that intersection - the victim of a blind woman in a minivan - I hopped on my bike and rode the speed limit down to the ice cream stand. The Harley guys were still there eating Rainbow Sundaes with red,white, and blue jimmies on them. I turned off my bike, removed my gloves.took off my helmet, neatly folded my armored jacket over the seat like a butler laying out the master's bed clothes, and I placed my bifocal sunglasses gently on top of the jacket. Then I hurtled the picnic table the Harley guys and their tank-topped babes were hogging, and kicked the crap out of them until the snakes in their matching tattoos cried out for mercy. "Vengence was Mine," I thought just before the alarm went off the next morning.

You did get one thing right. Most Beemer riders are self absorbed assholes. They wouldn't stop to help if their own mother was stranded along the road. They love to talk about their latest gadgets, and don't really give a shit about anyone but their own pitiful selves. Signed A Nony Mous

The purpose of this blog is to entertain, to make a lot of people laugh, and to occasionally provoke a little thought. I belong to a number of groups. One primarily rides BMWs. Another rides everything from cruisers to sport bikes, and from choppers to scooters.

I have an outrageous good time with everyone.

I had the the distinct privilege of sitting in a classroom last week with 16 other riders, 15 of who own Beemers. They were all there for the same reason: to be able to stop and render assistance to anyone, regardless of the circumstances.

This flies in the face of the comment that was posted above. But then again, as riders, you already know this.

Rash generalizations can be fun when they're coupled with a punch line, and I reserve the right to poke good natured fun at anyone.

The groups I ride with have no rules, other than to contribute some time in some useful way. That's my intention for this blog as well. This comments space is a perfect democracy. You can say whatever you want, but sign your name to it. If you prefer to use a nick name, fine.

Some day we'll all ride together, and have the thrill of putting faces to names. If you are compelled to speak from the sanctity of closed toilet, my initial reaction is to simply flush it. In most cases, the content of the message matches the method of delivery.

My personal e-mail address appears at the top right of this blog page. Please feel free to write to me directly if you'd like to start a dialogue. I'll answer all letters whenever I can get the time.

Keep the gas tank up and between your knees.

Proud to consider you a brother Jack!

"You did get one thing right. Most Beemer riders are self absorbed assholes. They wouldn't stop to help if their own mother was stranded along the road. They love to talk about their latest gadgets, and don't really give a shit about anyone but their own pitiful selves." Signed A Nony Mous

Ride a Beemer then do we?

Perhaps your perceived lack of entertainment or interest in this blog could be reflected in your finding somewhere else to play.

Dear Jack,
Don't blame the Beemer riders. As I remember our times together I seem to recall that there have been positively hordes of people that would not speak to you, sometimes for years at a time; BTW that doesn't include your several ex-wives who, through some misplaced sense of guilt by association, won't speak to me either. Several of your (soon to be ex), girlfriends however have been more than talkative.