One of the most common and sorriest excuses for a collision between a car and a motorcycle is, “I didn’t see the bike.” I got to hear this statement firsthand as EMS volunteers hoisted my banged-up carcass -- lashed to a body board -- into an ambulance this summer. Countless studies and hundreds of thousands of words aimed at public awareness of motorcycles on the roads just doesn’t seem to be making a big difference in cutting back on accidents of this nature. Probably because these filter down to a one-line statement on a bumper sticker, a rare 60-second public service announcement, or a paragraph on a division of motor vehicles mailer.

The fact is that if these folks can’t see a bike on the road, they won’t see any of this other well-intentioned stuff either. It amazes me just how dumb the average American can be. Many can’t coherently define the issues, or one issue, in the upcoming Presidential campaign. But I am amazed at how many can tell you everything about the contestants on America Idol, or the intimate details in the lives of the show’s judges. I have maintained that the best way to alert the public to watch for motorcycles is to tattoo an advisory just above Britney Spears’ coochie, and send her out in a limousine with Paris Hilton. Within hours, the message will be prominently displayed on every Hollywood exposé program and tabloid. I guarantee more people will see it and the message will travel like a lightening bolt from one computer to the next.

Various studies would have us believe that this is a question of motorcycle visibility. Many riders have become fanatical in installing brighter lights in a triangular pattern on their machine’s front ends. I am partial to Motolights for several reasons. They are bright. On my bike, they mount on the brake calipers about 9 inches above the front axle. The 52-watt bulbs throw a basket of light around the front wheel that my tired old eyes find very useful. The mounting is clean and the units are made of machined aluminum to last forever. 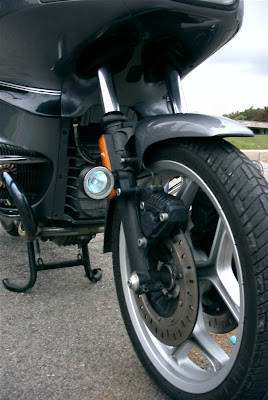 Motolights: clean installation, brilliant, good triangulation of light, all metal construction
I had these in addition to dual high-beams blazing when a mini-van made a left turn right into me, in broad daylight.

There are experts who believe that bikes’ dramatic lighting effects are getting lost in the sea of illuminated headlights that constitute today’s traffic patterns. By dramatic lighting effects I am referring to modulating headlights, laser-like PIAA lights, and xenon bulbs. And so the onus is again placed on the rider to wear fluorescent colors, reflective strips, and helmets that resembled Skittles the size of pumpkins. None of this stuff is a bad idea under any circumstances. But there is no magic talisman against driver stupidity.

There comes a point when you are statistically likely to come up against a motorist with the attention span of a gnat. I have often assumed these would be testosterone laden teenage boys, with car stereos rattling neighborhood windows, to compete the cell phone glued to one ear. Typically, these kids drive little four-cyclinder tin boxes with huge megaphone mufflers. Their counterparts are vapid teenaged girls, who apply make-up and text message as they drive.

Insurance companies will tell you that the likelihood of these kids having an accident is high, but not necessarily by running over a motorcycle. You may be more likely to meet someone 48 or older whose driving career is simply an accident waiting to happen. My dad used to say there were hundreds of people who never had accidents, but who caused 25 of them.

There are many reasons why an automobile driver might not see a bike. None of them are very good. It could be that their bad driving habits hadn’t caught up to them yet. Or, they may not not see bikes as a threat to themselves. Worse yet is that they fail to realize the hazard they pose to motorcyclists by tailgating, squeezing a bike in its lane, or treating a motorcycle as if it had the same operating characteristics as a car. (Yup there are hundreds of thousands of people who have no clue that a bike can bleed off 25% or more of its speed without ever showing a glowing stop light.)

There needs to be an equal balance between bike/biker visibility and automobile driver awareness. The place to determine whether or not a driver can pick out a motorcycle from other traffic is during the initial driving test and subsequent eye tests. The standard eye test is simply a chart on the wall, or a slide in a reader, that determines if the driver is blind. Something far more sophisticated is requited. Fortunately, the confluence of technology and the application of Pavlovian training makes this objective an easily attainable a reality. There are hundreds of virtual reality video games out there. Some of the pilot simulation computer games are damn close to the real thing. It would be easy to devise an animated video focusing on motorcycles on the road. 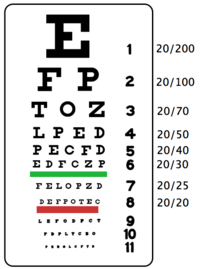 The standard eye chart doesn't confirm a driver can pick out a bike in traffic.
Using a kind of simulator device not unlike an arcade game, states could easily augment the standard eye test with a challenging and realistic program that would require drivers to pick out the motorcycles in various traffic patterns, under different conditions. The simulator would offer a clear road, a rainy day, fog, and traffic on a rainy night. The testing official would be able to run a standard program or increase the difficulty.

The driver being tested would have to find the motorcycle at least once in each scenario to pass. Two misses would score as a failure, and the applicant would be required to take a three-hour awareness course. For three misses, not only would the applicant fail but two bikers would come out from behind a curtain and beat the hell out of him or her, saying, “You stupid S.O.B... You could have killed me.”

I’m willing to bet cagers will start to get the message loud and clear.

Jack Riepe
Copyright 2008 Jack Riepe -- All Rights Reserved
AKA The Lindbergh Baby (Mac-Pac)
AKA Vindak8r (Delphi)
AKA The Chamberlain -- PS (With A Shrug)
Posted by Jack Riepe at Thursday, February 21, 2008

More non-entertaining drivel. No one cares about these reviews of books or equipments or useless life saving classes. Signed A. Nony Mous

What a ballsy statement, Mr. Mous! Is that French for mouse?

Jack- I think you're actually getting close to the REAL reason for the whole "biker" look ... Riding around in full leathers, skulls adorning every available space, evil-looking tattoos on any exposed flesh, the high-octane modern Vandal couture is all about eliciting a visceral fear response ... steer clear!

art, its English for WANKER.


Hazard Perception is a new part of the Compulsory Basic Training for riders and drivers in the UK.

Watch the demo and then try the practice clip.

I'd bet 8 out of 10 adult drivers and a substantial number of bikers in the USA would fail miserably!

This test should be a compulsory part of the driving test in all 50 states.

Hey Listen up A Nony Mouse, you squeeky little dumb ass hole. Go crawl in a hole somewhere a lick your balls. There are lots of us who find Jack's writing entertaining, valuable, and not quite as absurd as your living in the world. The nice thing about this blog is that you have a choice not to bookmark or read it. Get lost jerk-off!

Jack,
Another worthwhile piece which should get broader distribution; nice job.

Concerning A. Nony Mous...I am surprised that someone who has such disdain for your blog continues to constantly patronize it. Has he no life focused on more positive experiences? His negative comments demonstrate his pathetic need to denigrate someone who is clearly much smarter and more talented than himself.

It is mildly amusing that he doesn't realize you know who he is. To your credit, you are much more tolerant of his bullshit than I.

Under every bridge lies a troll. This one is mine.