The wizards at General Motors and Raytheon once offered an infrared deer detection system on the Cadillac Deville. Using technology left over from the Persian Gulf war, a device that measured body heat (or any kind of heat) was miniaturized to fit in a car and linked to a system that projected the image as defined by the measurement -- a deer in this case -- onto the windshield. The image would be appear in the approximate position it would be in relation to the vehicle.

Since I am not 80 years old, I was never tempted to buy a DeVille and have no idea what became of this noble idea.

The Geriatrically Sexy DeVille
But I do run with a renegade band of BMW riders, the majority of whom happen to be engineers, serving the electrical, aerospace, heavy manufacturing, nuclear and defense industries. There is always trouble whenever these guys get together. Any item of interest (i.e. a new computer, a watch, a camera, a steam iron, a tire pressure gauge or anything mechanical) will be disassembled, rewired, and reassembled in such a way that its performance is either dramatically improved or altered to function in an entirely different manner.

The boys had gathered in my garage on this particular occasion for an impromptu discussion titled, “Close Calls With Deer.” I was surprised to learn that nearly all had experienced a full-contact deer training exercise resulting in varying degrees of damage to the bike and injury to the rider. It was at this point I brought up the GM/Raytheon infrared deer detection project, stating I thought there’d be a market for a such a device among bikers.

Less than an hour later, the boys had resolved how to build such a unit to fit on a BMW K75. But so what? There are hundreds of deer lining the roads at night in Pennsylvania. Seeing them is only part of the problem. Avoiding them is a bigger part. It was then suggested that the effectiveness of an infrared deer detection device would be greatly improved if it could automatically trigger a system that eliminated the deer.

Several systems were discussed. Machine guns and grenade launchers were quickly dismissed as too conspicuous. Not everyone shares the bikers’ appreciation for “rats on stilts.” It was here the laser came to mind. These are easy to acquire, alter, and position on a motorcycle. Two visits to a Radio Shack later, the guys had rewired a laser pointer, placed it in a helmet-cam mount, and boosted it’s power to 20,000 volts by using a Xenon headlight ballast. They also gave it three power settings: tan, toast, and trim.

To assist in the final testing, I rode out of the garage on my laser-equipped 1995 BMW K75 in search of a deer-infested road. Most hunters can tell you that the best way to clear 400 acres of deer is to simply carry a rifle. The same applies to lasers apparently. I couldn’t find a deer anyplace. But I wasn’t on the road 15 minutes when I got cut off by some asshole driving a convertible. I shrugged it off to experience.

I followed the guy for a few miles, when he signaled for a left turn and slowed. I was just about to pass him on the right, when he changed his mind and continued straight. Judicious braking avoided a mishap and I fell in behind him again, thoroughly disgruntled. It was here I noticed he was talking on a cell phone.

Nearly a mile went by, including several possibilities for left turns, which he ignored while his turn signal winked in derision the whole time. We stopped at light and I yelled:

“Hey asshole! Hang up the phone and drive the car!”

The driver glanced in his mirror, raised his right arm (still holding the phone), and gave me the finger.

I hit the laser firing button. The laser was set for “trim.” The was a smell of ozone followed by the scent of fresh barbecue.

Now I have to figure out the best way to get this mounted, so I can display it on the same wall as my deer head. 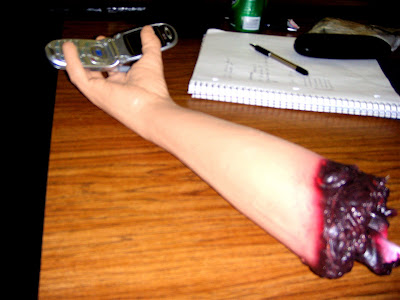 Jack, like much of what you write, this belongs on some junior high school kid's myspace page. That posse of yours must be a bunch of morons. Give it up, Jack, and get a real job, because this blog is going nowhere. What crap.

Those are some pretty strong words from an anonymous coward. :)

Don't be disingenius, Mattpie. How is calling yourself Mattpie any less anonymous? It's not like you told us your real name, address, phone number etc. BTW - Mattpie sounds like some cutesie name a teenage girlfriend would call someone.

Ooooh. Is this a schoolyard brawl? Can I play, too? Grow up, people.

Oooh. I'm so excited. Is this a schoolyard brawl? Can I play, too? Grow up, people.

Well, we may be morons, but we do have arm removing lasers on our bikes. What does yours have?

Jack,
Enjoyed the deer laser piece, especially the severed arm w/phone. I'm guessing the guy was driving a mail truck since it appears to be a right arm. He'll be looking for a new job, as it will be difficult to deliver mail without a right arm...unless he moves to the UK.

Dear Jack:
You are a Great American Hero. Will you ride through my neighborhood and zap all the Tacky Yacky Asshole Broads who drive unaware of their surroundings because they're listening to someone just like them who has nothing to say?

So, A Nony Mous - what's your real name, phone #, address, e-mail addy, etc. With that information we could decide whether or not we like you. Probably not.

I can't even spell my own name, which is a higher level of anonymity than one would otherwise have thought.

Dear Mr. Attaturk - Please do not confuse me with other anonymous posters, including the one who calls him/herself "Anon -ee-mouse". I have not posted anything regarding this most recent blog entry. Many people can be anonymous, but there is only one A Nony Mous. I know you are Polish, but this should be so simple that even you can understand it.

anonymous, apparently sucking on your teething ring has done nothing for your disposition. Perhaps a diaper change is in order.

The laser might be a bit gruesome for me but if you can get your engineer friends to develop a remote engine valve train interference inducer I would be interested. There are vehicles every now and then I wouldn't mind disabling with a push of a button...

Steve Williams
Scooter in the Sticks

Jack I needed a few minutes of down time so I read this one. I have been laughing so hard that I scared the cats..
Your skill with words just might exceed Tom's skill on a race track