The symptoms of PMS (Parked Motorcycle Syndrome) have been well documented by the medical profession and renown faith healers in biking circles. The condition is rampant in the winter. The more obvious signs include:
• Yelling at weather forecasters on television
• Putting on your helmet in the house
• Cursing each day of winter
• Regarding your home as a prison
• Telling people to “Shusssssh,” whenever a motorcycle is thought to be heard
• The feeling that your spouse has not stopped talking since the first snow fell
• Sitting at an eastern window for hours on end, drinking, waiting for spring, like a character in a Russian novel

In some acute cases, the afflicted individual becomes utterly listless, attempts to live in the garage, and responds to simple questions by making motorcycle sounds. One extreme case affected a rider in the same manner as Tourette’s syndrome. From December 1st through March 31st, this gentleman sporadically peppers every conversation with his mother-in-law with the word “bitch.” He returns to normal the first sunny day in April, greeting this dear relative with an apologetic wink.

Riders subject to PMS have devised a number of ways to deal with the symptoms, which gradually subside with longer, warmer rain-free days. One guy I know has a TV on a stand in front of his bike in the garage. He sits on it watching motorcycle races, and shows like “The Long Way Around,” while a fan blows wind in his face. He keeps a cooler handy too! From time to time, his concerned wife comes out and lifts up her shirt to add to the realism. Not all women are this understanding. When I suggested a similar arrangement, my girl thought the garage might get too cold for me, and suggested she could leave the car running to warm things up.

Another cure for PMS is to plan trips. A real trip plan calls for mapping out routes, setting an agenda, choosing hotels or campgrounds, and picking dates. Really getting into it means figuring out the things you want to see or picking the kind of roads that leave you exuberant, and dripping with sweat. These two objectives are not always parallel. And unless you’re riding alone, choosing the folks you ride with can be more important than the destination or how you get there.

I never hesitate to enlist the aid of a planning aid, such as a book or reports from experts. Road RUNNER Magazine  provides thorough recommendations for rides on three levels: the international ride, the local ride, and the some of the most challenging rides you can think of. My posse and I are thinking of two rides proposed in a recent issue. They are loops -- one through Pennsylvania, Maryland, and West Virginia (775 miles); and another in Maine (975 miles). The mileages don’t include getting to the start. (What’s refreshing about Road RUNNER is that they occasionally review bikes and gear, and do not sugarcoat the reports to curry favor with advertisers.)

Some riders combat PMS by getting out on every clear, dry day in the winter. “It may be cold, but my electrics can take care of that,” said my riding partner Dick Bregstein, whose primary concern is gravel and cinders left on the road from a prior freeze. “I hate getting salt residue all over the engine covers, but that’s a small inconvenience when compared with the chance to get another day’s ride in. There isn’t much fun in waiting for spring, and there are a lot of pleasant 40º days in January and March.” Actually, we had a couple of days in the 50’s this past January.

Three weeks of winter down time can be put to good use in early January or February. There is no better interval to do your own maintenance, or get your bike over to the shop. Most mechanics and dealers are thrilled to get the business at this time of the year, and many offer incentives or discounts. I know guys who rush their bikes into the shop prior to a good snowfall for a thorough annual tune-up, then have the machines waiting on a battery tender for the first good day in January, February, or March. That’s the procedure I follow and I managed to log 775 miles in January, but only 124 for this month, owing to the weather. My riding partner and I head out in temperatures as low as 27º, as long as the road is dry.

Some winter hazards can’t be found on the road though. Not too far from where I live two old stone bridges constructed by the Pennsylvania Railroad (circa 1900) cross over Boot Road. Old stone and masonry railroad bridges are notorious for leaking and seepage. I passed through these last week, and couldn’t help but notice huge icicles (four or more feet in length) dangling from the roof liners inside. These could easily kill someone in a car, let alone on a bike.

I study the weather forecast the same way brokers look at stocks. Yet in the enthusiasm of getting out on the road there is sometimes a tendency to discount the safety margin where the forecast is concerned. One cold winter night, a group of riders and I met for dinner, with snow in the forecast for midnight. I opted not to ride my bike but others did. The snow started during the appetizers and there was more than three inches covering their bikes when they came out. Ken Bruce, a real adventurer, took off in the snow having only 5 miles to cover. He later described it as not one of his wiser decisions. 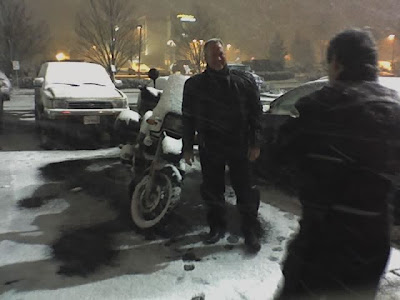 Ken Bruce exits dinner to find his bike covered by three inches of snow.
He attempted to ride it home anyway.
Just this week, two other buddies of mine left their respective workplaces only to discover that falling snow beat the forecast by several hours. One had but a few miles to on on a level road and got home okay. The other had ten miles of curves and changes in elevation. He ended up dropping his machine on a hill, but suffered no physical hurt, though he slammed one of his sidecases. (He picked the bike up and continued on his way.)

Another friend, Jeff Harth, rides extensively through Argentina and South America. This past summer he thrilled us with stories about getting caught in the snow, high up in an Andes pass. He was forced to spend several days waiting for the storm to pass -- at the bar in a ski resort. The road thawed to blacktop by the resort, but was solid ice several miles away. He reached a point where he could go neither forward nor back -- and a transport truck driver loaded his machine onto a flatbed.

Adventure is where you find it. But you seem too find it a lot more often on two wheels.

Jack Riepe
© Copyright 2008 Jack Riepe -- All rights reserved
AKA The Lindbergh Baby (Mac-Pac)
AKA Vindak8r (Delphi)
AKA The Chamberlain -- PS (With A Shrug)
Posted by Jack Riepe at Saturday, February 23, 2008

Jack,
Yes, planning rides is a very enjoyable pastime for those of us who find ourselves weather-challenged several months/yr.
Also, and I know this comes with age, not necessarily wisdom or maturity, I no longer feel the need to be riding in 27 degree temps. I've been caught in unexpected bad riding weather too many times.
Still, I look forward to those fun, exciting and challenging spring rides. Keep 'em coming.
P.S.: In the interest of preserving your long term relationship with your significant other, you might consider referring to her as someone other than "my girl".

Motonomad, He calls them all 'my girl' so as to avoid too much confusion on his part. It's a Long List, but then I'm sure you've seen him in action.

Jack, you should apologise to whichever mother in law that was. This third person 'a rider' nonsense isn't fooling anybody.

Any chance of seeing you at Mid Ohio this year for Vintage Motorcycle Days? Marque of the year is Triumph you know.

Do you intend to fire up the "Strumpet" for the vintage bike show? Looking at my schedule, I could easily rite that into my agenda. Are you camping? I will attempt to camp in a hotel.

The plan is to trailer the bike(s) out on Thursday, camp on Friday and Saturday, drive back on Sunday, sleep Monday.

I saw you(trying to)camp on a hottie once. A similar spelling but critical differences. Memories of the aftermath still conjure night sweats.

Camping in a hotel would, albeit limp wristed, a good deal less traumatic for your female aquaintances, and generally safer for the environment

Do you know why they named the bike Triumph? Because no one would buy the marque if they called it "Defeat."

Dear Lindbergh Baby, It's the lack of time, not the lack of a great steed, that prevents me from riding the 700 miles to Mid Ohio.

Now I know that you're a Beemer rider, and that you probably do 700 miles between brushing your teeth and changing your underwe....., socks, but for a real man (Me), on a man's bike, (Triumph), the combined dandificating mass of a microwave oven, curling iron, satellite tv, electric cucumber slicer, automatic hand waver, make-up mirror, tea cosy, shoe trees and that map thingy y'all carry around just, well, aint right.

If you can make it out to the meet, take a right at the campground entrance and go all the way to the end. I'll be the guy in the fly stained leathers growing hair on his chest.

I've got it bad!! I'll have to name this one, PMS2, since I'm prone to the other type. If the weather doesn't improve soon, one of my PMSes is going to blow a gasket!